*This content was originally broadcast on CBS Sunday Morning on July 19, 2020. *

From skyscrapers in Manhattan to sleek campuses in Silicon Valley, offices across the country have been mostly empty for months.

"In some ways, this virus is a workplace virus, it's an office virus," said Amol Sarva, co-founder and CEO of Knotel, a company that designs and rents office space to major corporations internationally. "This is one of the few things that ever happened that shut every office in the world down."

"You gonna be making a lot of changes now?" asked correspondent John Blackstone.

"That is an understatement, John!" Sarva laughed. "The world is different. And we're not going back to the old way."

For some, that may mean not going back to the office, period. Tech giants Twitter and Square have told their employees they can work from home indefinitely. Other major companies plan to keep offices closed at least until the end of summer … some until the end of the year.

That's not good for those in the real estate business, like Sarva: "That's certainly a thought that was through my mind these last few months: 'What if everyone can work from home forever?'

Those who do return may find a workplace that is not only healthier, it's actually more appealing.

Sarva said, "Social distancing and professional distancing means your desks can't be shoulder-to-shoulder anymore. And I think a lot of people will be whispering, 'Thank God!' because they didn't love it."

One prototype for the post-pandemic office is up and running in Amsterdam, where real estate company Cushman & Wakefield converted their office into a test site for the "6 Feet Office" project. Managing partner Jeroen Lokerse said they started the project "with the ambition to get the world safer and sooner back at work." 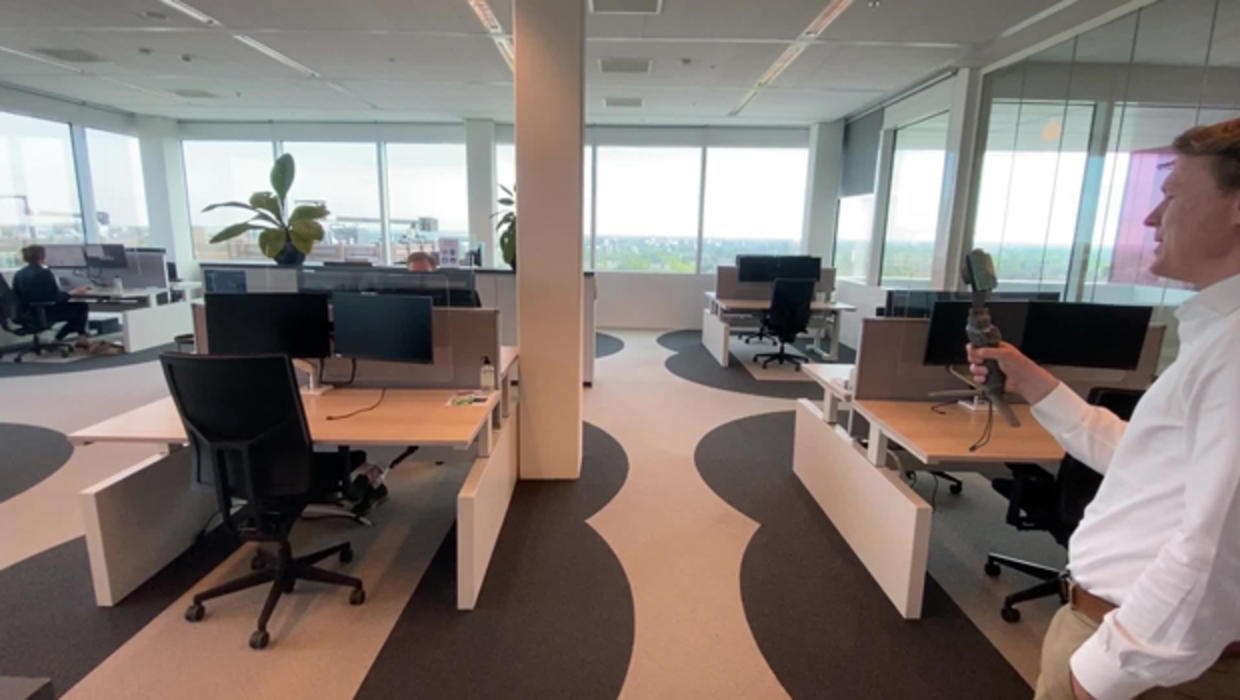 Lokerse took Blackstone on a tour via Zoom. "We follow the arrows. Everything at our office at the moment is one-way," he said.

Carpet colors show where employees can walk and where they can't. Desks are no longer crowded together.

"In this corner of the building, there were 28 desks; at the moment there's 16 desks," Lokerse said. "We have implemented simple things like these glass things behind screens, so people can sit across from you." 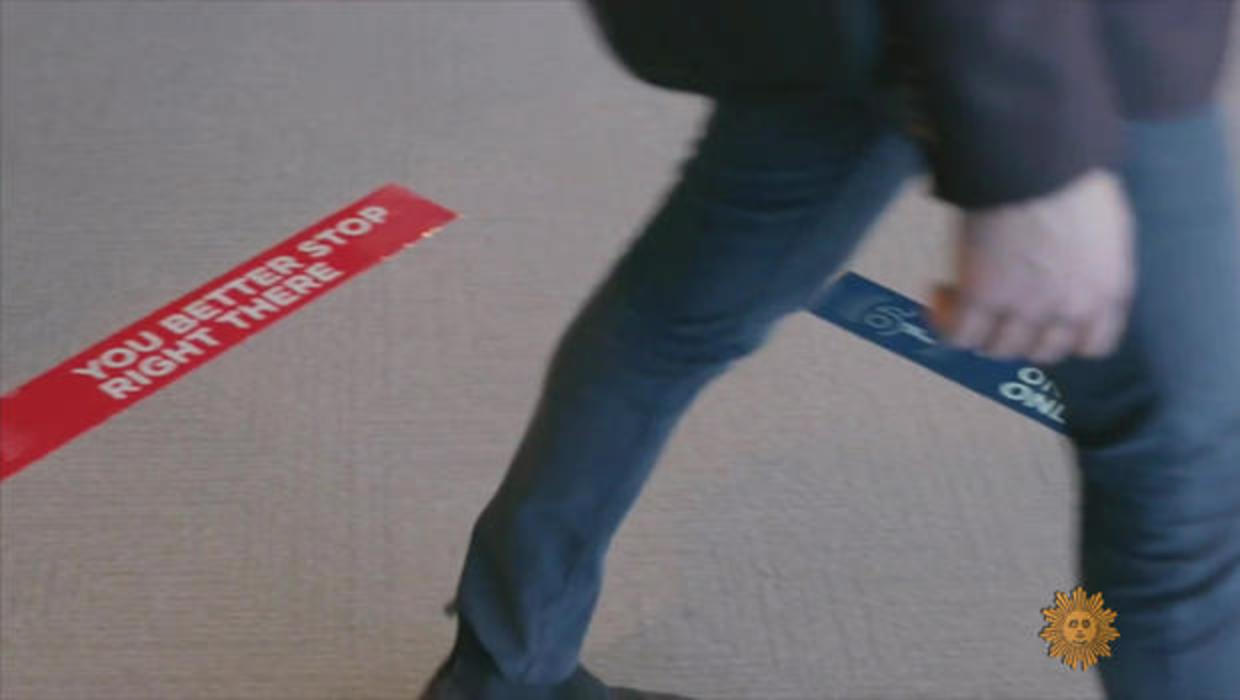 One worker was asked about the new workplace: "Yeah, it's very nice. Better than at home," he said.

"'Better than at home' – so, that's always a good thing to hear!" Lokerse laughed. He then showed Blackstone was the office used to look like, with desks crowded together. "It is a lot of people in a very small space with not much privacy, and difficult to make phone calls, and be distracted by your colleagues around you." 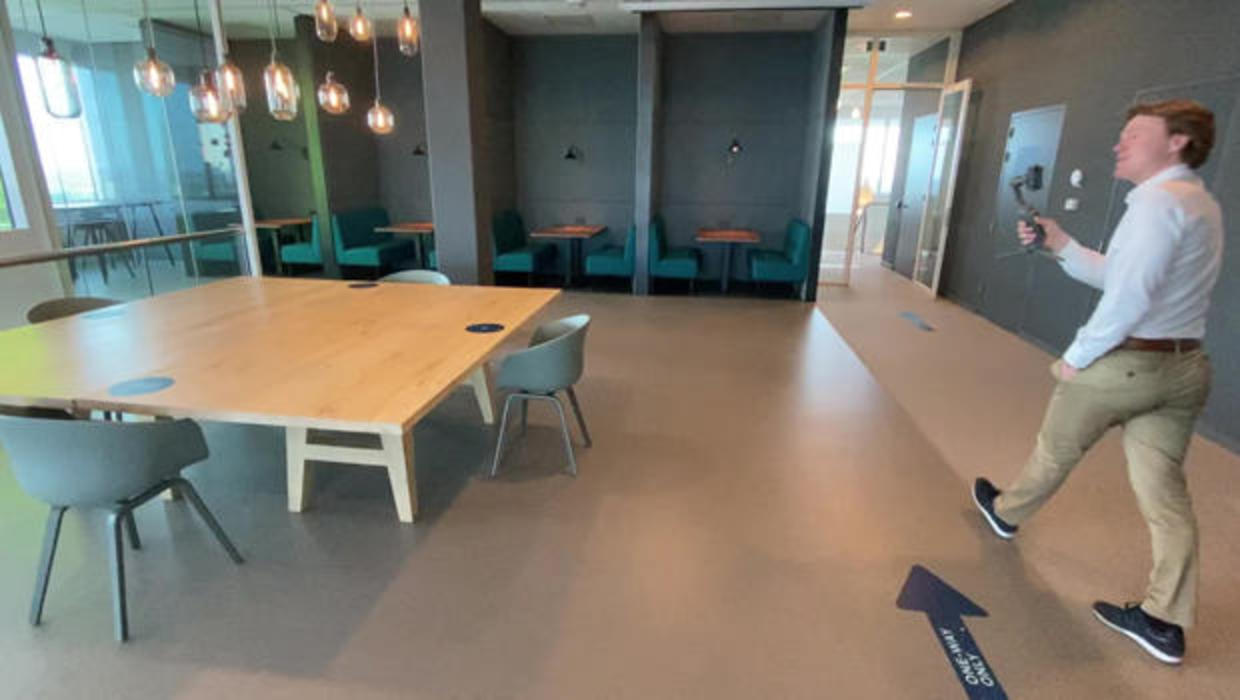 Blackstone asked, "Are you going to keep that old office sort of as a museum piece of the way things used to be in the early 21st century?"

"I think it will indeed be a museum piece," Lokerse replied.

The open office isn't really a new idea. As far back as the 1930s, companies crowded as many workers as they could into offices that looked much like factories. And then, in 1968 furniture maker Herman Miller introduced the "Action Office." We know it better today, of course, as the cubicle – fodder for humor, from Dilbert cartoons to the 1999 film "Office Space."

The cure for the cubicle was a return to the open office, but updated. It became the preferred design for big technology companies. Open offices were depicted as cool and trendy, meant to encourage collaboration and the exchange of ideas.

But a study in 2018 found that forcing workers to sit side-by-side with no privacy actually resulted in a 72% decrease in face-to-face communication.

Blackstone asked Amol Sarva, "Is it time to say, "Rest in peace the open office plan'?"

"Yeah, the open office is over," Sarva said. "It was already over for a lot of reasons. It was too noisy, and you couldn't concentrate. And it was well on its way out the door."

But getting workers back into the office will take more than just moving desks further apart. "To have people make that change in their daily behavior after spending a few months at home requires confidence that it's not a life-threatening situation to go to work," said David Levine, a professor in the Haas School of Business at UC Berkeley.

"What we need at this point is a lot of studies of what types of workplaces are safe and in what conditions. It's clear that having a door that shuts is a real advantage in stopping the movement of pathogens, but we don't know at this point how dangerous different types of open offices are," he said. 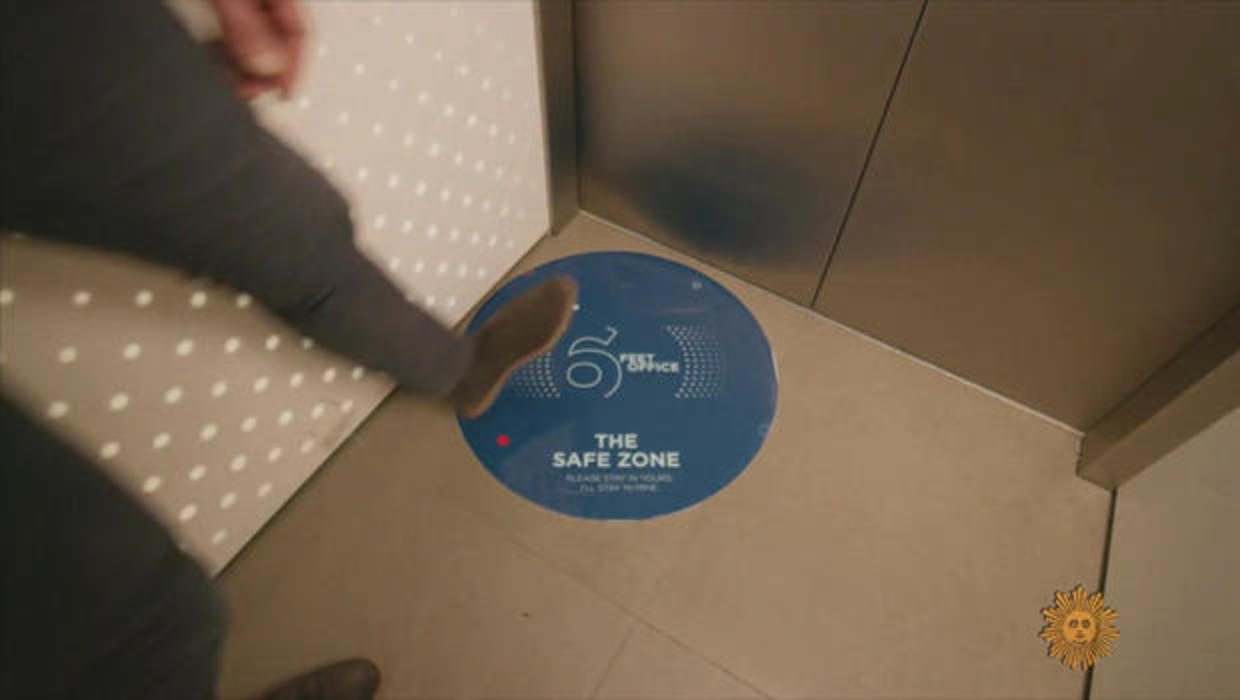 To reduce the dangers of returning to the office, routines that would have seemed invasive a few months ago are likely to become common.

New procedures at CBS require that before employees enter the office, they use their cellphone to connect with a nurse. Then, they take their temperature and show the nurse that they don't have a fever.

Other companies are doing the same, and more.

"The privacy considerations are so vivid," Sarva said. "We have had the ability for a long time to track where staff are; are they in the office? Are they at home? Are they on a trip somewhere, on a private vacation? That was all possible before. But it never made enough sense to the people and the companies that it would be a deal worth making.

"I think a lot of companies are gonna propose that deal, and staff are gonna have to decide, 'Is it worth it for me?'"

The value of returning to the office is a calculation both workers and employers are beginning to make.

Levine said, "Managers have learned two things. A lot of what they've learned is how much work can be done remotely, At the same time, this distancing has emphasized there is real value in interaction. The water cooler is more than just a cartoon symbol. It really is a place of social interaction, a place of communication and social bonding. And workplaces do work better when they have more of that interaction."